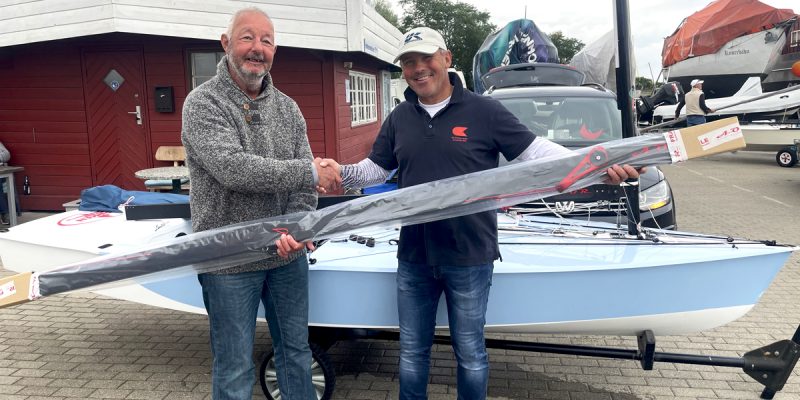 Bo Petersen has won the 2021 ART OF RACING Euro Series, which came to a windy conclusion at the German Championship at Wismar over the long weekend of 30 September to 3 October.

Sixty-six sailors came to the start line of what was a very windy event, with two days lost due to high winds. However six races were managed with one day of strong winds and one day of moderate winds. Andre Budzien won the title again, from Jan Kurfeld, with Petersen third, which was easily enough to win the 2021 ART OF RACING Euro Series by 47 points from Greg Wilcox and Andreas Pich.

Stage 3 of the Euro Series also includes results from the Autumn Trophy in Bandol, won by Nick Craig from Wilcox and Laurent Hay, as well as the Belgian and Polish Nationals. The Belgian Nationas was won by Pieter Van Laer from Stephan Veldman and Jørgen Holm, while the Polish Nationals was won by Tomasz Gaj from Michał Strumnik and Przemyslaw Drozdzik.

Going into the final event in Wismar only Petersen or Wilcox could realistically win the series, which has consisted of the international events in Garda, Kiel and Bandol, along with seven national championships in Belgium, Britain, Denmark, France Germany, Poland, Sweden and The Netherlands.

In the early stages the overall lead changed several times, but then Petersen took the lead at the end of Stage Two, after winning in Kiel, and never relinquished it. A total of 293 sailors did at least one event, with 28 taking part in at least three and one, Fabian Rossbacher, competing in five events.

The 2021 ART OF RACING Euro Series was introduced because of COVID-19 to replace the World Ranking List and the OKDIA Euro League, which can hopefully return in 2022. The purpose was mainly to have some fun, make some media promotion of the events and provide some focus, incentive and encouragement for sailors to attend one or two more regattas.

New Zealand based Art of Racing is a supplier of specialised dinghy racing equipment, including booms for OK Dinghies and Finns and has become the boom of choice for the majority of the fleets since first entering the market eight years ago.